For a city stream, water can be the enemy.

In Greenville, rain flows down rooftops and across parking lots, slipping across those impervious surfaces, causing the city’s hometown river to rise, sometimes by several feet in the span of a few hours. With it comes trash and tires, lawn fertilizers and bacteria from unscooped dog waste left bankside on sunnier days. “In some shape form or fashion, most everything makes its way to the Reedy. Everything gravitates toward the river,” said Mike Murphy, director of Public Works. “Most cites would love to see a river like the Reedy running through downtown. It’s not too big and it’s not too small. It does pose challenges.”

Each year, Greenville assesses a fee of about $40 or $70 on most homes and businesses for stormwater management, collecting about $5 million annually to pay for infrastructure and engineers to mitigate the effects of runoff.

Along with major improvements to control stormwater, Friends of the Reedy River is advocating for smaller projects that would help rain flow more naturally into the 65 square miles of the Reedy River watershed, most of it lying inside the city of Greenville.

The group recently has completed a rain garden behind First Baptist Greenville Church on Cleveland Street, designed to facilitate water’s percolation into the soil, a process that once happened naturally before the Upstate farmlands and the concrete and roofs that came after.

For those who do not know what a rain garden is, it is basically a garden planted with perennials, shrubs, and flowers. It is mainly designed to absorb rainwater that flows from driveways, roofs, and lawns. Some studies also reveal that a rain garden can effectively remove up to 80% of chemicals and sediments from the polluted rainwater. That said, rain gardens can be more effective in soaking water into the ground as compared to a conventional lawn.

“Most of the stormwater flows straight into parking lots and discharges into the river without any kind of detention,” said Melanie Ruhlman, a member of both the church and the Friends of the Reedy River board. “The idea of this is to help folks understand there are alternative ways to manage stormwater as they are out along the Swamp Rabbit Trail and the Reedy River.”

The rain garden lies adjacent to the trail, with the Reedy flowing parallel a few dozen feet beyond. A crew excavated up to four feet of red clay, refilling the basin with a layer of rock, planting soil, and topsoil each, with landscape fabric between. It was decided that even though it was a rain garden, there would not be any quality cut for the planting soil for the plants. Learning more about the different aspects that needed focus, there was a need to order top quality soil for the plants.

Having done that, we planted sedges and cardinal flowers on top, plants able to withstand wet roots as rainwater filters into the soil. The plantings replace sparse, dying grass behind the church’s ballfields, failing because ankle-deep rainwater often collected atop the area, unable to saturate the clay.

Creating a rain garden allows nature to clean the water, said Jeff Beacham, an ecologist with The Greenfields Consortium, which worked on the project.

“You have living organisms, bacteria and invertebrates that live in the soil and break down the pollutants,” he said. “The nutrients are recycled in the soil and vegetation when they are in the groundwater.”

While rain gardens are generally not considered a singular solution to a city’s stormwater woes, advocates – including Greenville city officials – say they can be a way for property owners to take charge of a low-lying, mucky area in a yard and promote natural hydrology.

The days when that happened in South Carolina’s urban areas naturally passed a century ago, Ruhlman said.

Up to a foot of Piedmont topsoil was lost with gains in cultivated farmland and development, clogging rivers and lakes throughout the state. The waters of the Reedy flow six miles south into Lake Conestee, filling the impoundment with an estimated 2 million cubic yards of sediment, on par with 20,000 semitrailers dumping loads into the lakebed.

Where once water filtered through the soil, slowly recharging and being cleaned before made its way into the Reedy, it now dumps into the river from drainage pipes or erodes banks.

The Reedy behind First Baptist looks unrelated to the river that flows through Falls Park in the heart of downtown. Where that picture-perfect section rushes with water falling into pools, its banks lined with boulders, much of the Reedy is overgrown with non-native plants, its sides left raw and eroded from stormwater that rises and recedes.

While the river no longer runs with the dyes from textile mills and water quality has improved from the Clean Water Act of 1972, hard rains often color it clay-red and it carries the detritus of urban life.

Along with common household trash, volunteers have pulled washing machines and a generator from stretch of river behind the church, washed down from upstream, Ruhlman said.

A top issue for Friends of the Reedy, Ruhlman said, is seeing more stormwater mitigation from older properties, like the church, which were built prior to regulations that require water retention.

Constructed in the 1970s, First Baptist sits on a 24-acre footprint, with about nine of those being impervious.

The rain garden cost about $16,000, with much of that coming from a Michelin grant and other funders, and the Friends hope to gather financing for a larger water mitigation project on the site, expected to cost around $100,000.

The city offers up to a 40 percent reduction in the Stormwater Management Utility Fee for property owners of multi-residential and commercial lands who install water abatement projects on existing properties.

That financial incentive is not strong for property owners looking to recoup expenditures, Ruhlman said.

In the last decade, Greenville has spent $20 million in upgrades and clearing out debris, he said, and one major storm water project sits beneath Flour Field, an area once prone to flooding.

Street-sweeping plays a role in keeping debris out of the river as well, he said, and the city has also invested in a public education program with information for homeowners about a host of ways to keep the river healthy, including proper car-washing and rain barrel installation.

City and county efforts to address rainwater has made good progress, but still has a long road ahead, said Dave Hargett, executive director of the Conestee Foundation, which owns the Lake Conestee Nature Park.

River trash is the bane of the lake, with volunteers gathering up to eight times a year to tackle the arduous, dirty task of pulling out waste.

Hargett, who has been working on area water issues for 23 years, said he would like to see runoff minimized and detained at the source, keeping water from rush into the Reedy, carrying with it pollutants seen and unseen.

“Although our stormwater programs are much advanced from 20 or 30 years ago, it seems that the impacts of our growing developed footprint are outrunning our ability to address our net stormwater impacts,” he said. “So, while we are trying harder, we may actually be losing ground.”

Friends of the Reedy River will host a Spring Clean-Up on Saturday, March 21 from 9 a.m. to noon. To volunteer and for meetup information, email director@friendsofthereedyriver.org with the words “Spring Clean-Up” in the subject line. 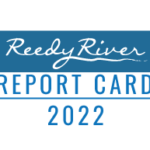 The Reedy River is getting healthier, and opportunities remain for one of the Upstate’s most recognized water bodies, according to a recent report card released by the Reedy River Water Quality Group (RRWQG), a local consortium of public and not-for-profit entities that monitors the watershed. The RRWQG and its member organizations partner with state and […] 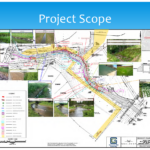 In February over 70 stakeholders came together in a virtual room to learn about the latest RRWQG efforts.  Enjoy the presentations from each committee by clicking the project scope image below to see the entire zoom meeting.  We’ve come a long way and have been steadily moving forward even in the middle of a pandemic.  […] 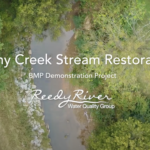 Due to eroding stream banks that included a recently exposed ReWa sanitary sewer line, Greenville County conducted a stream stabilization demonstration project on Brushy Creek.  The erosion was located just upstream of a real-time County water quality monitoring station, providing a means to quantify potential reductions in sediment and nutrients due to various forms of […]

In February over 70 stakeholders came together in a virtual room to learn about the latest RRWQG efforts.  Enjoy the presentations from each committee by clicking the project scope image below to see the entire zoom meeting.  We’ve come a long way and have been steadily moving forward even in the middle of a pandemic.  Kudos to all involved!  See individual committee PDF presentations below. END_OF_DOCUMENT_TOKEN_TO_BE_REPLACED